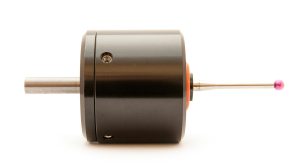 Finally! Yesterday received remaining parts for new touch probe. Headed straight back home to put all pieces together. I rarely publish my fails in manufacturing, but this time I’d like to share that only two minor mistakes were made. One of them was finish type. It ought to be sandblasted before anodizing process unfortunately this step was omitted – purely cosmetic feature, and does not affect performance. Also after inspecting all parts I missed one taped hole, fortunately this feature can be completed by myself.

There were many reasons why I changed design. For now I can mention few of them:

I will be testing and assembling units this week. Then e-shop link will be opened. Limited quantity will be available for a while.

I have a list of people who contacted me previously. Some of them wanted to be beta testers, some order fully functional unit and some wanted to be distributors. Personal e-mails will be sent to each of you. Excuse me If by mistake you will not received personal notification, let me know by writing me again or commenting under this post.